Thrills & Spills at the Islay Sessions

Posted on December 2, 2019 by fiddlinphysicist

Last weekend was the 9th Islay Sessions, which was started by the late Fraser Shaw in 2011, along with his great pal Grahame Allison, for whom he worked at the Port Charlotte Hotel. The format has changed little over the years except for the size of the audiences, with all concerts full to capacity. People are now travelling from the mainland and much further afield to enjoy the music. Over 60% of the audiences were from afar bringing a much needed boost to the economy of the island.
The first of the intimate conservatory concerts in the Port Charlotte Hotel was on Friday night featuring VOX; Calum MacCrimmon, (Breabach), Laura-Beth Salter, Kim Carnie and Innes White. Their musicality and vocal harmonies were a joy to behold. A great session in the bar followed, with all the visiting musicians joining in.

Saturday dawned with a few bleary-eyed musicians about. However, after a good breakfast they were ready for the day’s workshops on fiddle, accordion and guitar. Laura-Beth held a mandolin workshop in the afternoon, followed by a slow session in the bar with the participants.
Saturday night’s concert in Bruichladdich hall was all set to go when a last minute problem arose and “Islay time” came in to force when a lady arrived asking for assistance. We put things on hold, plucked six members from the audience and went to the rescue of a member of the audience’s car that had landed in the ditch while being parked! With all returned to their seats, Calum struck up the pipes and opened the concert. 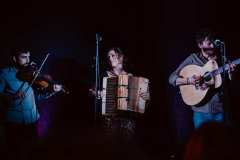 First to appear were Charlie Stewart and Innes White who rendered a selection of lively and beautifully controlled tunes. They were followed by Kim Carnie, whose wonderful voice, combined with the musicality of her band were jaw dropping. Following a short interval and of course the raffle, Eabhal came on to the stage. Their driving style soon had feet tapping and hands clapping. The night concluded with another great session in the hotel bar.
First up on Sunday, saw a good crowd gathering at Fraser’s seat outside Bruichladdich distillery for the now annual dram to Fraser’s memory. Whilst a poignant occasion, there was a lovely warm ambience and good to see more folk gathering.

The finale came on Sunday night for the second concert in the Conservatory with Claire Hastings, albeit a year late (she lost her voice last year and was unable to attend). The purity of her voice, style and choice of songs had everybody captivated and I can assure you, it was well worth the wait!
Sponsors are so important to us to be able to put on such an event and we thank and salute you for your generosity, for allowing the Sessions to continue – Laphraoig, Bruichladdich, Ardbeg, D+L Currie Ltd., The Celtic House, Calmac, The Fraser Shaw Trust and The Port Charlotte Hotel.
Dates for your next year’s diary – 20-22nd November 2020. See you then!

Fiddler, Composer, Events Organiser
View all posts by fiddlinphysicist →
This entry was posted in Blog/News. Bookmark the permalink.
%d bloggers like this: